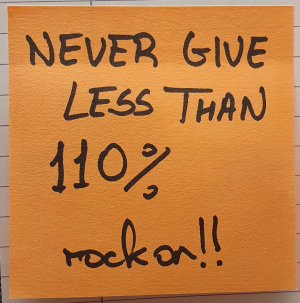 A few people over the years have asked me about what drives me, what inspires me to keep waking up in the morning and trying to do my best.

Unironically, the answer is often Boku no Hero Academia. The anime. If the MC can do his best every day and try to overcome his limitations, why can’t I? This has been a big inspiration from April 3rd 2016, when it started airing. This coincided with when I started watching it.

The show gained extra significance in my life when I started rowing during my first year of undergrad. The physical development aspect of the anime now directly coincided with my own goals. The ‘semantic gap’ (pardon the abuse), between my source of motivation and where I wanted to channel it, decreased.

It really helps that I am interested in the things that I want to be motivated in. For example - I genuinely enjoy rowing; and programming; and writing. If I was trying to get myself to do research into operational semantics, the story would be quite different. So perhaps the secret sauce is luck? I just got lucky that I am disciplined with my very wants.

I could attribute that to a roll of genetic dice, but that’s not interesting. There is definitely a sense of inherent masochism in everything that I do. Whenever I wanted a chocolate, but knew that I probably did not exercise enough to warrant it (from a calorie-balancing perspective), I would stop myself. These subtle “stop right there, sir; don’t do that now” moments came up multiple times a day. In a way, I was conditioning myself to want the right things (whatever my definition of right was/is).

Having goals is important, but often the best things in life come about organically. My most popular project, BetterJoy, was born just because someone on Reddit asked whether it was possible to use the gyroscope found in Nintendo Switch Pro Controllers as input to Cemu (a Wii U emulator). I figured “Why shouldn’t it be?” and decided to sink my teeth into it. From there on, the project began growing organically and I was motivated by the (mostly) positive community feedback and recognition that it got (and perhaps GitHub stars).

The concrete moment when I realised that I made something bigger than myself was when I found a random post of Baidu or something other Chinese-language site discussing my program. Through the liberal use of Google Translate, I managed to read through the forum thread and found that BetterJoy (then known as BetterJoyForCemu) was genuinely being used! There were people offering advice on how to overcome some technical bugs to other people, and even some forked versions of the program that supports off-brand controllers.

My motivation for rowing though, is not as organic. It was and continues to be a way of proving to myself what I am physically capable of. That, and all of my friends in first year took up rowing; I needed to get in on the banter. To quote my as-of-yet unreleased novel(la) “About Sport” (working title):

“Drive and creativity - what more does one need to propel themselves into their work? As long as you have your mind set on achieving something, anything is within your grasp. Even if your reach is far too limited now, stretching out, day by day, will see gradual improvement. Come a month, two, or even a year, you’ll look back and be surprised by how much further you can see, feel and touch.

“Sports have always appealed to me as a way of finding out where my maximum potential lay. To be able to feel every nook of your body swell and heave; to tame that screaming aching voice that wants a rest; that is superseding yourself. To cross the finish line, performing those last, almost mechanical motions that have got you that far in the first place, and experience the ever-blissful moment of calm.

“When the rushing and beating blood in your ears is no longer in a fight with your muscles, and the world is buried or rather masked by your internal cacophony that was there from the moment you started counting down your actions. That moment of ironic silence when nothing else exists other than your own body and the sweat running down your face; that moment is the reason to play sports.”

My training plan for that follows a modified version of The Pete Plan with more steady state™ and extra bodyweight circuits. This results in about 85km of rowing a week. There is a lot of discussion right now about high-volume training, but since I am nowhere near Olympic level, I think that will do.

What drives me? To see what the best “me” could look like, from a mental and physical perspective.